The Story of a Colourful Backpack

It was the first day of my last year in primary school and for the first time I was allowed to buy a backpack.
Before then I had used some old bags that my mother or my aunt used thirty years before, which I was a little ashamed of in front of all my classmates with their brand new shiny ones.

In the shop, I fell in love with this Invicta backpack at first glance. Multicoloured and bright, and I liked colours and still do. What's wrong with loving colourful things?
The price of the backpack was a little more than I was allowed, but my eyes were shining so much that my mother bought it for me anyway, and I recognise now, twenty years later, that this was indeed a great gesture, in a time when my family sometimes didn't even have money for petrol.
Full of joy, I showed up at school on the first day of the new year, an important moment! What better way to celebrate than with my new backpack? As soon as I arrived in class, however, I realised that this happiness was very fragile. My backpack was definitely the most colourfulo one and the bunch of children of my class did not welcome the news with the same amount of enthusiasm I had. The backpack was nothing but a new manifestation of my diversity, of that different sensitivity I had, that made me perhaps gentler, more respectful, that made me love dance, that gave me a proper behaviour in every situation and explore the world with creativity.

For years I had already been nicknamed, depending on the situation: "sissy", "female" (as if being a woman were to be an insult! But you go and explain that to an 8-year-old who's definitely biologically not a girl, and who wonders why people decide to describe him that way), "gay", "frocio", "finocchio", "checca", "ricchione", all of these being pejorative nicknames to define homosexuals.
Italians get very creative when it comes to insulting gays.
If you think about it, the Eskimos have so many words to describe the snow, we just as many for the gays. I wonder why.
And just another linguistic note. Did you know that in English the word "bad" derives etymologically from a word used in the past to define homosexuals? Homophobia has been so strong that over the years the word has gone on from just insulting gays to define all evil in general. Ask me why we need a gay pride again.
This is to say how much our language also represents the voice of a culture that really doesn't spare any efforts to discriminate against minorities.

But anyway, back to the bag.
My joy for the new colourful purchase, which I was so happy to wear when I was going to school in the morning, immediately turned into an internal grey, a desire to sink, to disappear, to hide my bang and myself with it, to be transparent. It began with a black marker with which I tried to cover all the colours on the backpack and ended up with slowly ceasing to use the bag to go to school or anything else. I went back to using the old ones that I hated so much, but not so much as myself and that feeling of being different and not welcomed by those who were not like me. The bag stayed at home, in a closet.

The following year, the first of the middle school, I bought a new backpack. Blue. All blue. A colour that I didn't like and still don't like. All that coldness. I have always been green, orange and purple. The blandness of blue was not for me.
Still, I bought that backpack. What could be more masculine than blue, no drawings or doodles, no chance of being identified among the crowd. I've always hated that backpack, it wasn't me, it didn't represent me. What it represented instead was my attempt to swallow who I really was.
Many years of lies followed. Lies I was telling myself and others. I stopped watching some movies or listening to certain genres of music for fear of being judged, I decided that being a dancer wasn't the right thing for me and I created a barrier between me and any other form of art, including music. Until the end of high school, I did everything to conform to the norm, even though I don't think I ever really succeeded.

All this hidden chaos could not remain locked up forever, though. When I reached the bottom, I started a long journey backwards.
I am grateful for the fact that my family has always been open and allowed me to express these hidden identities without too many hiccups and that my life choices let me approach new people around me. More and more people who were able to accept the differences, who were open to dialogue and capable of exchanging ideas and welcoming new ones, rather than judging.
I began the rediscovery of what I really was, of all my colours.
A process which has of course implied a lot of pain. All the layers of hidden emotions and unspoken words, erected as a fortress to protect me. It took time and a lot of work to get rid of them, and I haven't finished yet.

Then, a couple of years ago I found my multicoloured backpack in the recesses of my home in Italy and I thought fuck it. I took it out, dusted it and put it back on my shoulders.
Obviously, people continue to make comments, and some keep pointing the finger when they see all those colours on me.
Certainly it is not the typical backpack that a thirty year old would use to get around every day. Maybe it's not enough "adult" enough.
But I think that adulthood can't be proven with what you wear. You can tie a millions of ties around your neck and remain deeply immature a few inches above, in your brain.
I think that instead, adulthood can be proven by the fact that I can finally wear what I fucking want and not let myself be affected by the judgment of people who don't accept diversity, and that I can be who I really am and show it without fear of not being what people expect of me.

This is what I've learned through all these years, and this is what the world should have told little Valerio on that first day at school with the new bag: "Don't worry about what they say. They are just scared of being different. But they are all different, we are all different. Some, however, decide to be like the others for fear of being exposed and vulnerable. But you can be whatever you want, and if they don't accept it right away, you can choose to be strong and confident, with your ideas and feelings, walk forward, chin up. You'll see, slowly they will begin to understand that there is nothing to be afraid of. Show them. It's the only way you can live your life as you really want it, and it's the only way new ways of being and thinking can be spread, respected and accepted."

I have learnt that. It took about twenty years, and I still have a lot to learn, but now here I am, traveling around the world with my colours on my back.

Now, inside my colourful bag, I decide to put whatever I want. :-) 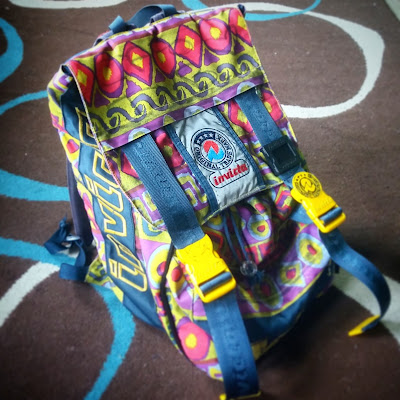 Posted by Valerio Lysander at 05:28

Email ThisBlogThis!Share to TwitterShare to FacebookShare to Pinterest
Labels: be yourself, illuminate, me on a white page, tidal mental head